Reported via mobile in the Obstructions on pavements and roads category anonymously at 10:24, Thursday 8 April 2021 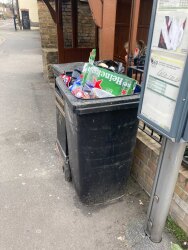 Large full wheelie bin dumped by bus stop outside Postal Close/Bourne road Bexley. Has been there for over a week, now overflowing with rubbish, reported before no action taken.