Bags left behind by Bexley Council

Reported via desktop in the Pavement category anonymously at 17:48, Wednesday 7 April 2021 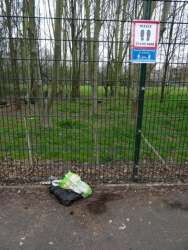 Black bags and other bags of rubbish were reported on Sunday, 4th April. Black bags were cleared today but smaller bags have been left behind, The ASDA bag can be clearly seen in the original photo exactly where it has now been left behind. I don't understand the thinking behind the decision to ignore these 2 bags.