Road map
Back to all reports

Reported via desktop in the Obstructions on pavements and roads category anonymously at 17:07, Monday 29 March 2021

Sent to London Borough of Bexley less than a minute later. Report ref: 2641376. 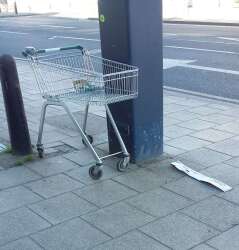 Upper Wickham Lane. This area had three dumped trolleys which were cleared but like mushrooms they are starting to sprout again.